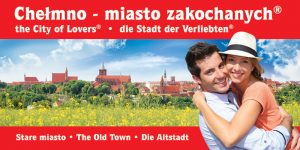 Chełmno is famous not only for its medieval street layout and architecture but also for the cult of St Valentine. The saint’s relic, kept for centuries in the Parish Church of the Assumption, gained popularity when the trend of celebrating St Valentine’s Day emerged in Poland. Since 2002, when the relic was put on display, Chełmno has hosted a huge celebration called Chełmno Valentine’s Day. It received the name of the City of Lovers or the City of Love.
Referred to as the love capital of Poland, it is a perfect place for the Feast of Saint Valentine. It is a tradition now that on 14 February thousands of people arrive in the town to participate in the festivities regardless of weather conditions. Despite cold winter, the atmosphere is really hot. The event is organized with the contribution of local institutions and entrepreneurs. Before the actual date, in Chełmno and Świecie you can admire ingeniously decorated shop windows, competing for the title of the most beautiful Valentine shop window. The event is accompanied by numerous exhibitions, games, concerts, art contests and competitions, such as St Valentine’s Day – different faces of love or Chełmno in cartoon drawing.
On 14 February a special mass for lovers and couples celebrating their wedding anniversaries is organized in the Parish Church, where people can see the famous relic. The joyous atmosphere of the day is enhanced by street performances, a colorful parade of knights, motorcyclists and members of the local rifle club. St Valentine Fair is yet another highlight. In the afternoon there are music concerts and the Festival of Love Songs in the market square. People build a heart of votive candles. The one made in 2013 has an entry in the Polish Book of Records and Curiosities.
Chełmno specialties have also become quite popular. Heart-shaped cakes, biscuits and chocolates are prepared by local confectioners and bakers all year round. Alchemy and romance culinary workshops attract a lot of attention, the same as the Valentine competition for culinary schools held in the Practical Education School Complex in Grubno. Romantic atmosphere can be felt in Chełmno not only on Valentine’s Day.
In Chełmno there are many other elements associated with love traditions and the City of lovers ® nickname. The Nowe Planty park is a romantic destination for leisurely strolls. The place is known for unique heart-shaped floral carpets. ‘Lovers benches’ are traditional meeting places. The one located in the New Planty park near the Grudziądz Gate is hugely popular with newly married and couples in love, as evidenced by the growing number of so-called love padlocks hanging from a special fence. Another bench is situated near a small fountain in Ludwik Rydygier Park of Memory and Tolerance. Its focal point is a “sculpture” of two linked hearts made of flowers, a favorite background for wedding photographs. The third bench stands opposite the seat of the Municipal Office. It is called an ‘interactive bench’ because live greetings can be sent from here via the Internet (www.chelmno.pl Live Greetings)

New routes for tourists and lovers are prepared all the time. Along the trail for geocaching fans The heart of the city of lovers you can see old meeting places including so-called Hajratka (ul. gen. J. Jastrzebskiego) and the spot near one of the houses in the market square ‘under the clock’ (Omega brand from the beginning of the 20th century). As the saying goes: “time doesn’t matter for those who are in love” and here under the old clock which always shows six people can meet not counting passing minutes.

In 2010 the Municipal Office in Chełmno issued a reprint of the old love book, originally published by Walenty Fiałek (Chełmno leading publisher) at the beginning of the 20th century. Containing templates of love letters, greetings, name poems and many others, it can provide a lot of fun for contemporary readers. The publication can be bought in the Museum of the Chełmno Land.

A romantic trip to Chełmno should include sightseeing in the Old Town, registered in the List of Historic Monuments issued by the President of Poland in 2005.

We are sure you will leave Chełmno enchanted by its unique atmosphere and architecture. You will remember the town where time does not rush and the Town Hall clock strikes only happy hours.

See, Remember and Fall in love