It is one of the most beautiful Renaissance art objects in Poland. It was the focal point of the Medieval main square. Built in 1567-1572 in place of the earlier Gothic city hall that had been built around 1298. The tower was added between 1584 and 1596, and a Baroque cupola was made by Krzysztof Wagner from Gdansk in 1721. The city hall is a detached building situated slightly to the south-west of the centre of the main square. It is a rectangular building 13.20 m wide and 22.70 m long, and about 47 m high. Originally, a Gothic town hall stood here, which was discovered during the excavations performed during the preservation-repair works in 1956 – 1959. The original town hall from the 13th century was a one-storey building 10 m wide and 13 m long and about 8 meters high, with a tower, a tower clock and two bells: one councilmanic and one municipal. The town hall had several chambers: the balance room, the archives, the city council’s chamber, the Chelmno court chamber and finally the summer representative hall on the first floor. The present building from the 16th century swallowed up the previous one. It was built for the city to gain more prestige and because there was simply need for the ever growing secular authority thanks to the 16th century economical growth of the city. The late-Renaissance outer façade of the city hall is, with its richness of ornamentation, very close to mannerism with the Italian like motive of the attic built in 1885-1887. The second floor was added by knocking out the windows in the wall between the attic’s pillars. The repair works of the Town Hall were performed in the years 1852, 1863, 1882, 1885-1887, 1956-1959, and 1976-1983. Since 1983 the Tourist Information Centre together with the Museum of the Chelmno Land with its regional-historical exhibitions has been open here. The permanent exhibitions in the museum are: ‘The history of Chelmno’ and ‘Ludwik Rydygier, a world famous Polish surgeon’. The institution organizes temporary exhibitions in the Townsmen Hall on the second floor as well. 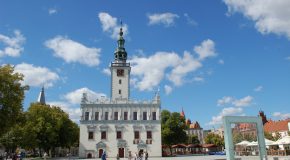