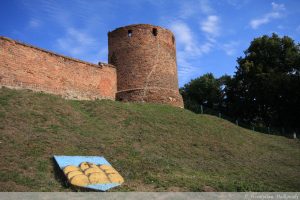 There is perfectly preserved (almost along its entire length) city defensive wall – 2,270m long – shaped by the outline of the platform the city is situated on. This brick wall was erected between the mid 13th and the mid 14th centuries in the place the original wooden-earth fortifications. In the 14th – 16th centuries the wall was made higher and filled in, among others by Sigismund II Augustus in 1563 and just after the Swedish wars in 1678. In the 2nd half of the 19th century two sections of the wall and five gates were pulled down to improve communication. Also, and the end of that same century the rest of the wall was renovated. There were about 25 or 27 towers, 17 of which are fully preserved and 6 of them in fragments. There were 7 gates at the exits of the main streets. From the East lowland side the wall was additionally protected by a moat. The main entrance to the city from the north-east was through the Grudziacka Gate and its extension – Grudziacka St., and in the south there was the Weaving Gate (also known as Sukiennicza) with Tkacka St. (22nd Stycznia St.) Both gates were situated by the moat and were originally protected by drawbridges. Other gates are the Torun Gate (the Holy Spirit Gate) – a very important transit gate, the Bridge Gate at the exit of Szkolna St., to the west – the Franciscan Gate also known as the Gate of the Barefoot (later the Bishops’ Gate), The Fishermen Gate at the exit of Rybacka St., and the Water Gate (“Painted”) at Wodna St..