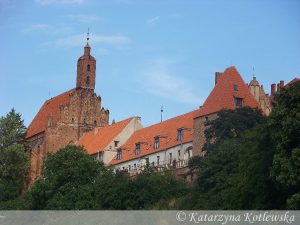 The first Cistercian convent in Poland was built in 1203 in Trzebnica in Silesia. In 1235 another convent came to be in Zarnowiec and around 1266 the Cistercians were finally brought to Chelmno. In the first half of the 15th century the nuns left the convent and it was taken over by the Benedictines in 1429-1438. In 1579 Magdalena Morteska joined the convent with some companions, very quickly became the prioress and ran the convent until 1631. She changed the rule of the Polish Benedictines who seized to be a contemplative order and started to teach. She was the creator of the first female education in Poland. The activity of the Benedictine Order was stopped in 1821 and in 1822 the convent was taken over by the Sisters of Mercy and has been in their hands until now. The convent complex was built at the turn of the 13th and 14th centuries close to the Teutonic stronghold called the Tower of Msciwoj (Mestwina), by the city walls, above the steep bank of the Vistula river. Integral parts of the complex are: a hospital, the cloister itself, gardens and a church built along the northern stretch. At the end of the 19th century there was a substantial alteration and expansion of the convent complex.
The earlier mentioned Tower of Msciwoj has adjoined the cloister buildings from the North-West since the beginning of the 13th century. This remnant of the Teutonic Commander’s residence, which was also used as a guardhouse, is a quadrilateral brick building with a ribbed cross-vaulted chamber on the first floor. 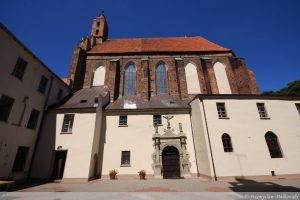 The Convent Church of St. John the Baptist and St. John
the Evangelist

The church is a two-storey hall building. A stellar-vaulted choir gallery for nuns divides the building into two storeys. The southern stone portal from 1619 of Nederland-Gdansk origins deserves special attention. Inside there is a Gothic polychrome from the 14th century discovered in 1932, the tombstone of Arnold Lishoren from 1275 made of black limestone, and a huge crucifix – today’s Christ in a tomb from around 1380. From Renaissance relics, mainly mannerist, the following stand out: a window ledge of the nuns’ choir gallery, a few sets of stalls from around 1597, a pipe organ from 1619 and a pulpit from 1597. The other elements of the church’s interior are the Baroque main altar and side altars from the turn of the 17th and 18th centuries. There are some valuable paintings from the 17th century, among them: a pieta from Bartlomiej Strobel’s circle and a portrait of the prioress Magdalena Morteska. 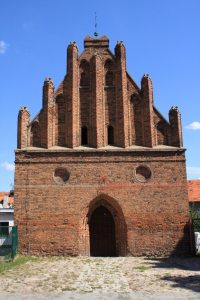 The youngest Gothic monument of Chelmno from the first half of the 14th century. It is a rectangular brick hall building with a very interesting front elevation. It was renovated in 1936-1938 and again in 2005. 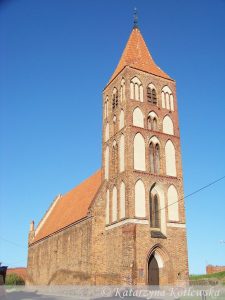 The church of the Spirit Holy

It was built around 1280 or 1290. Originally it was a hospital church run by the Order of The Holy Spirit but it went into the hands of the Sisters of Mercy in 1694. In 1828 it was transformed partly into a military storehouse. Its sacredness was restored in the beginning of the 20th century. It is a brick hall building with a quadrilateral tower on its western side. The interior is covered with a tunnel vault from the 18th century. There are Gothic polychromes from the 14th and the 15th centuries discovered during the restoration of the church in 1937. The last renovation took place in 1995.
The church of the Holy Spirit is a place where the achievements of the Regiment of the Chelmno Land can be seen. The Regiment, just like the Chelmno Knights’ Host, popularizes the knightly ideas and traditions as well as historical, cultural and tourist values of Chelmno and the Chelmno land. 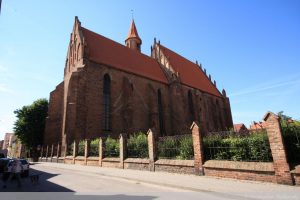 The church of Jacob the Elder and St. Nicolas (post Franciscan)

The church was built for the Franciscans brought to Chelmno in 1258 and it remained in their hands until the dissolution of the order in 1806. The church was built all through the 13th century until the 14th century when it was finally finished to look like a pseudo basilica. In connection with the progress of the Reformation and lack of vocations there was a revival of the Franciscan monastery in around 1535. In 1739 wall paintings were added and in 1751 a chapel, now nonexistent. In 1822-1828 the church was handed over to the Sisters of Mercy and since 1859 it has been used as a church for secondary school pupils. In about 1859 the interior was renovated in the mock Gothic style. The three-nave church consists of two main parts (28-meter-long each) and a 24-meter-long presbytery closed straight. The presbytery is ribbed and cross-vaulted, whereas the main body is stellar-vaulted. The once rich furnishings were moved to other churches and in the 19th century the church’s interior together with the altar, the organ gallery and the pulpit was finished in mock Gothic. The monastery buildings adjoining the church from the north side were pulled down in the first half of the 19th century. 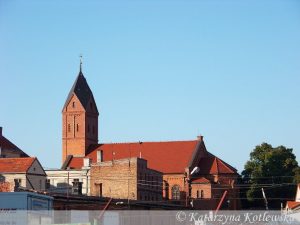 The church of Mary the Mother of God of Czestochowa (garrison)

It is one of the most recently built churches in Chełmno. It was erected between 1874 and 1875 for the then established Prussian garrison. It is a brick, aisleless construction with a short presbytery, and a tower in the front topped with a triangular roof. After Chełmno had regained independence, the church became a garrison church for the Polish army troops staying in the town, which function is has kept until today. Present-day furnishings and accessories come mainly from the 20th century. Numerous commemorative plates dedicated to different army units connected with Chełmno make an interesting element of the interior. 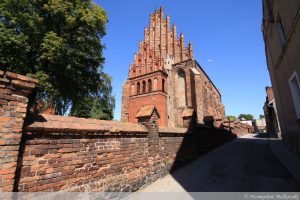 The church of St. Peter and Paul (post Dominican)

The Dominican Order came to Chelmno as early as in 1233 just after the first location, and settled for good around 1238. The dissolution of the order took place in 1829 on the orders of Prussian authorities. Between 1850 and 1945 the temple was used by the Protestant community. It used to be the second Dominican complex in Poland. This Gothic, brick building was erected in several stages since the mid 13th century until the end of the 14th century. The walls of the main nave were made higher in the second half of the 17th century thus converting the church into a basilica. The presbytery is closed, many-sided with a well preserved ribbed-crossed vault and a stellar middle span. The main body is divided into three naves of unequal lengths by four-sided pillars. Inside there are wall paintings from the 14th century showing the scene of the Crucifixion. The church had a very sumptuous decor of the interior from the second half of the 18th century, mainly Baroque and Rococo. Only the main altar in the Rococo style, the stalls and the pulpit from the same period have been preserved. Also, inside the church there is the Gothic tombstone of the first bishop of Chelmno – Heidenryk from the 14th century. 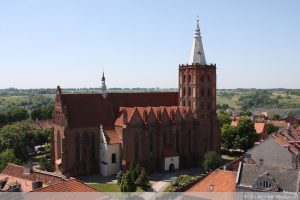 The Church of St. Mary’s Assumption

It belongs to a group of the oldest and the greatest temples of East Pomerania. It is an outstanding masterpiece of Gothic architecture being at the same time a model solution for other Medieval churches in the Chelmno Land and in the Teutonic State, e.g.: for the cathedral in Krolewiec (Königsberg). The church’s construction was funded by the Teutonic Order. It was mentioned in a location act from 1233 and Rev. Henryk is mentioned as the first parish priest in 1238. In the 13th century a public school and a library by the parish church came to be. In 1472 ‘studium particulare’ was founded by the church – a school equivalent to higher grammar school. It was run by the Brethren of the Common Life from Zwolle in the Netherlands. In 1519 the bishops granted the parish church to the Friars raising it at the same time to the rank of a collegiate church. The temple became St. Mary’s Sanctuary after 1649. Between 1676 and 1825 the church was run by the Missionary Priests who started a printing workshop there in the 18th century. In 1825 the Order of Missionary Priests was dissoluted. Between 1883 and 1884 the church was restored and re-Gothicized. Another restoration in 1925-1928 revealed wall paintings from around 1400 which were then reconstructed. The church was originally wooden. The brick one was erected in three stages between 1280 and 1320. In 1501 the north tower was completed, while the south one remained unfinished.  The parish church is a precisely orientated building (on the East-West axis) consisting of an elongated presbytery, a three-nave hall and a solid west façade with two towers of unequal heights. There are fragments of Gothic polychromes from around 1400 to be found on the walls of the presbytery and side naves. There are Gothic sculptures of the apostles from around 1330 or 1340 by the pillars, and in the northern nave we can find a tombstone of Lambert Longus from 1319. The interior of the church is rich and predominantly Renaissance, Baroque and Rococo. A Baroque main altar crafted by a woodcarver Maciej Rode in 1708-1710 showing St. Mary’s Assumption should be especially appreciated. Other valuable artefacts include: Baroque and Rococo side altars by the pillars (the only relics of St. Valentine in northern Poland are kept in one of them), a pulpit, and a pipe organ from the end of 17th century.

There are two chapels by the presbytery: the northern one devoted to Mary the Mother of God of Chelmno (the former tomb-chapel of the Niemojewscy), with a deeply worshipped and miraculous painting of Mary the Mother of God of Chelmno placed there in 1649; the southern chapel of the Holy Spirit, rebuilt in 1685-1695, with a Baroque altar and a low-relief of the Last Supper.
The so-called Meluzyna from the 17th century is an interesting monument – a deer head founded by the Brotherhood of St. Hubertus and suspended under the ceiling of the main nave – a unique hygrometer.
Zwiedzanie zespołu klasztornego zawieszone od 5 sierpnia 2020 roku do odwołania