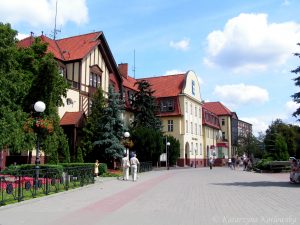 It is the building of the former offices of the district authorities. It was built at the turn of the 19th and 20th centuries. Its interesting architectural form of a so called Prussian wall makes it unique as it is one of few preserved buildings in Chelmno built in this style. After the administration reform in 1975 it became the seat of the City Council. 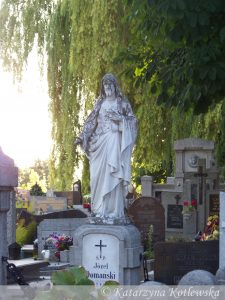 In the past the bodies of the dead were buried around churches while distinguished city rulers, benefactors and members of noble families were laid to rest in church crypts. In the Middle Ages there were several churches and the same number of cemeteries in Chełmno.
It was only on 29 March 1804 that the Prussian king Frederick Wilhelm issued a decree in which he ordered to set up a cemetery outside the town, which was most probably the consequence of new sanitary regulations. Following these instructions, “Kamlaria”, the finance office of Chełmno donated the Catholic commune an embankment along the city wall spreading between the Toruńska Gate and the Prochowa Flanking Tower. The area designed to be turned into a cemetery had in total: “One “morga” and 74 perches” (measure units of old Chełmno). The earliest burials on the cemetery were initiated only in 1814, while the practice of burying the dead on the church grounds was finally abandoned after the decree had been issued by the prefect of Bydgoszcz on 14 May 1814. Nevertheless, 20 years later the cemetery turned out to be too small, hence in 1852 it was moved forward from the Prochowa Flanking Tower to the gate in 22 Stycznia Street and then in 1877 a new area, a plot purchased from the Sister of Charity, was added. Another extension was done in 1917 when the Town Magistrate granted a plot of land for the parcel next to the Church of the Holy Ghost. In 1907 a mortuary was built and a year later a new set of laws was prepared. Other achievements that were undertaken included encircling the territory with a brick wall with an iron gate, tiling the central passage with cement slabs, and installing a water supply system.
After World War I the cemetery was extended several times. The contemporary cemetery has a distinctive, stepped layout. Regretably, the oldest gravestones have not remained until today. A majority of gravestones and tombs date back to just the mid- 19th century. Appealing features of the cemetery include a baroque crucifix from the 18th century put up on the Neo- Gothic octahedral column from the second half of the main alley, and a stone grave plate of Nikodem Bardzki (died 1863). 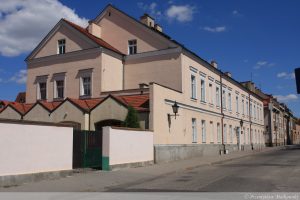 The Chelmno Academy at 6 Szkolna St.
In Medieval Poland the Jagiellonian University was funded in 1364. Chelmno was given a right to establish a university twice, which enabled creating the second centre of this sort in Poland. For the first time the right was granted by Pope Urban VI in 1386 and for the second time by Sigismund of Luxemburg the Roman emperor in 1434. Unfortunately, various adversities made it impossible to realize those ambitious plans. However, in 1473 Studium Particulare – a high school – was established. It was managed by the Brethren of the Common Life from Zwolle in the Netherlands. In a very short time it became the best scientific institution in Royal Prussia. Historians claim that Nicolaus Copernicus just before going on to study at the Krakow University had been one of the pupils of this famed at that time school. The high school was closed in 1530 and reactivated in 1554, later to become the Chelmno Academy in 1692. In 1756-1779 the Academy gained the status of the 31st colony of the Krakow Jagiellonian University. The existence of the school was endangered as a result of the 1st partitioning of Poland. In the end it was closed in 1818. Nowadays the High School No. 1 is situated there. The building was modernized in 1998 and a sports complex was added in 1999. 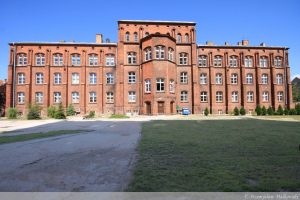 After the Chełmno Academy was closed down the Chełmno High School (opened in 1837) actively participated in lifting Polish spirit. It was the most Polish in character high school on Pomerania. The battle to introduce the Polish language ended successfully with introducing it in 1840 in high grades only, but in 1849 teaching Polish was extended to all grades. The list of the most prominent teachers of the school included Dr Wojciech Łożyński, priest Antoni Knast and Stanisław Węclewski, a philologist and researcher. The following students made remarkable
contribution: Ludwig Rydygier, Stanisław Kujot, and Kurt Schumacher ( at the beginning of the 20th century). Defending Polish traditions and the Polish language was strongly supported ( both financially and morally) by the residents of Chełmno and by the Society for Educational Help for Young Men of West Prussia. During the Prussian occupation the society covered the cost of the studies of approximately 500 students. In the last years of the 19th century, in response to imposing restrictions on teaching the Polish language, many secret self education organisations rapidly developed in the High School. Between 1838 and 1839 the organisation “Polonia” and then in the 1850s the organisation “Zan” were established. After 1871 two organizations  were active: “Mickiewicz” and “Tomasz Zan” before they were united into the “Filomaci Society” after 1880 (the name referring to members of society at the Vilnius University) after the initiative of Stefan Łaszewski, the first voivode, of  the Pomeranian Province in a later period. 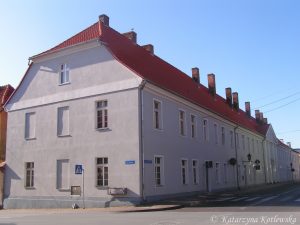 Former the Cadet School Barracks No. 2

Built in 1776 for the Cadet School funded by Frederick II in order to Germanize the young gentry. The Baroque-classical barracks were erected in place of Gothic bourgeois buildings. The Cadet School built in 1829 is situated on the premises of the Barracks. 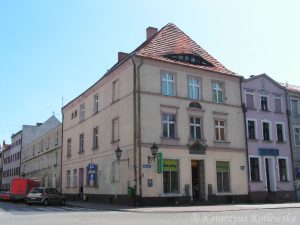 The Gothic-Renaissance Cywinscy tenement, 2, Rycerska St. (on the corner of the Main Square)

It is one of Chelmno’s most valuable tenements. Built in the second half of the 13th century and enlarged by adding annexes in the 14th century. Rebuilt in 1570. It is a Gothic-Renaissance building. Various sculpted elements can be found on its elevation: a triangular pediment with a low-relief of the Annunciation and a founding inscription by Melchior Cywinski, a semicircular tympanum with a low-relief of the Three Magi making obeisance, and lion-headed mascarons. 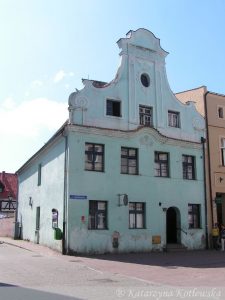 Built in the second half of the 18th century on the retaining wall of a Gothic tenement from the 15th or 16th century. It has a late Baroque look with a beautiful top.

The most interesting of the granaries is situated at 2 Podmurna St. It has a two-storey construction of a so called Prussian wall on stone foundations and was built at the turn of the 18th and 19th centuries.. 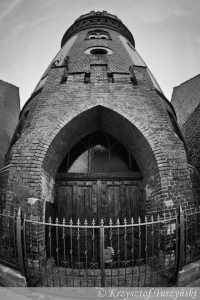 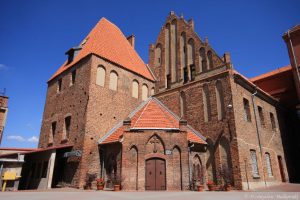 Mestwin’s Tower situated In the North- East of the premises of the convent, next to the fortified wall, and adjoining the preserved wing of the convent. The tower was erected in the second half of the 13th century when it was probably a part of a /the Teutonic residence. It makes a rare example of residential towers. The has been rebuilt many times until it achieved the present shape. 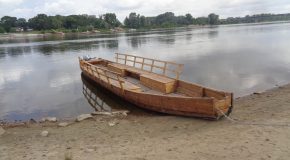