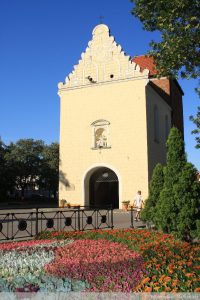 is one of the gates not pulled down in the 19th century. It was built at the end of the 13th century and extended in the 14th century. It has a shape of a square with the entrance of a semicircular arcade. In about 1620 a chapel called ‘Na bramce’ (on the gate) was built on it. It is connected with the cult of Mary the Mother of God of Chelmno. There is a mannerist top from about 1620 on the chapel made in a Nederland-Gdansk workshop. 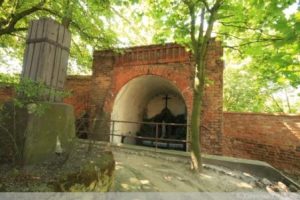 at the exit of today’s Dominikanska St., within the limits of the monastery complex. It is probably the oldest city gate, it lost its significance in the 14th century, was bricked up and turned into a chapel. 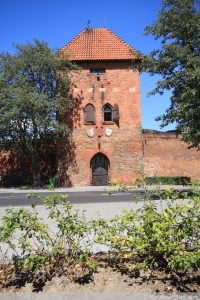 has been the seat of the Chelmno Knights’ Host since 1999. You can see there various knights’ weaponry, copies of medieval arms, flags and standards – both in private hands and owned by the Host. Let us present the Chelmno Knights’ Host a bit closer. The main aim of the activity of the Host is to get to know and propagate the following: – the history of Chelmno and the Chelmno land and especially its medieval period – the knightly tradition and culture, especially the history of the knights of so called ‘Polish element’ inhabiting the Chelmno land under the rule of the Teutonic Order. Also, the aim of the Host is the city’s promotion, its historic, architectural and tourist values, as well as a monuments protection activity. The Chelmno Knights’ Host takes part in tournaments organized in Poland and in historical staging of the battle of Grunwald. It is also an active member of the Chapter of the Knights of Poland – the honorary institution setting the rules and the code of the present knighthood. The Host is the organizer of the Tournament of the Friendly Fraternities with the main prize – “The Golden Lizard”. Annually, over 120 knights from 15 Polish fraternities participate. During the tournament, which takes place in the Knightly Medieval Settlement in Koscielna St., a traditional combat for points is held and rewarded, including: combat on foot, archery, javelin, combat on ‘Master Paginski’s machines’, a plebeian tournament, siege staging, capturing of the city walls and a battle. 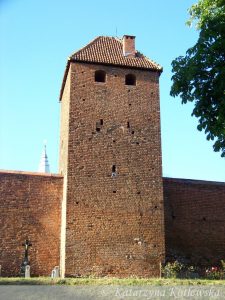 it was built at the turn of the 13th and 14th centuries and later bricked up and made higher. In the Middle Ages it was used to store military equipment and to manufacture gunpowder. After a renovation it was where the Regional Museum was situated from 1977 to 1983. Currently, there is a permanent exposition ‘From the ancient times of Chelmno and the area’ and a modest ethnographic exhibition.