A fashion of celebrating St. Valentine’s Day in Poland has been present for the last several years. It is a day when all the enamoured try to be close to each other. There are several St. Valentines and Blessed Valentines canonized by the Church. Most probably, the Valentine in question could have been a priest executed in 269 during the reign of Claudius Gothicus Augustus or a bishop of Interamna near Rome who lived in the 3rd century, or maybe it was the same person. In ancient times St. Valentine was the patron saint of epileptics and those suffering from cholera. In England, on the other hand, he was the patron saint of the enamoured. And this is where it came from to America and later everywhere else where the Anglo-American culture is present. Not many people know that for a few centuries St. Valentine’s relics have been kept in the Chelmno parish church. As Rev. Jakub Fankidejski writes in his work titled “Marvellous paintings and places of today’s Chelmno diocese” published by Pelplin in 1880 – “it is the saint’s head, or rather a small fragment of it. The relic is placed in an octagonal reliquary which is made of silver, is one foot high and weighs about three pounds. On top of it there is a round dome-shaped lid where the relic is kept and where it can be seen and kissed through the glass. The relic is the size of about two fingers.” The relic has always been famous for miracles. Around 1630 Jadwiga Dzialynska née Czarnek together with her daughter commissioned the reliquary to be made to thank for the miracle of healing. This inscription was placed there as well:

*(“To the only God in the Holy Trinity/ St. Valentine/ Martyr/ Jadwiga Dzialynska née Czarnkowa/ the Bratyn and Jasienica Starost/ for the help experienced in sickness/ for me and my daughter thanks to/ St. Valentine, the Christ’s Martyr/ to this Saint’s veneration/ This gift we offer/ 22nd May 1630”. )

The reliquary was crafted in Torun by Wilhelm de Lassensy. In 1715 the Missionary Priests built a new separate altar in the parish church devoted to St. Valentine. It can still be seen next to the main altar and separating the main nave from the south one. There is a painting of the martyr’s decapitation. According to oral tradition the work was to be painted in Rome but there is no proof to support this thesis. In the past, numerous votive offerings were placed there by the faithful to thank for experienced favours. St. Valentine’s relics were connected with the church of the Holy Spirit in the 18th and 19th centuries. They were worshipped during church fêtes and the first of them fell on 14th February. On the eve of the fête the reliquary was transported from the parish church to the church of the Holy Spirit where it was expositioned by the main altar. The faithful sang songs and recited litanies of St. Valentine. Many people used to bring gifts as well. One of the priests offered the reliquary to the faithful to kiss. On the same day, 14th February, since the early morning there were several Masses celebrated in the church of the Holy Spirit, among them: a votive one with the exposition of the Blessed Sacrament and vespers. During those services the faithful could kiss the reliquary as well. The whole celebration used to finish with a procession from the church of the Holy Spirit to the parish church. The other fête fell on the second day of Pentecost and the faithful taking part in this one attained plenary indulgence. When the church of the Holy Spirit started to diminish in the beginning of the 19th century also worshipping the martyr lost its significance and lavishness. In time it has been completely forgotten. Today, being in possession of such extraordinary mementoes, we would like to revive the memory of St. Valentine and celebrate his noble ideas. 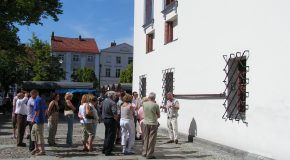 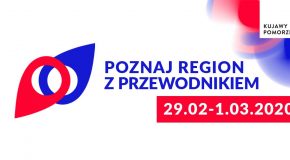 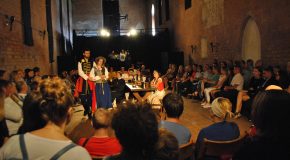